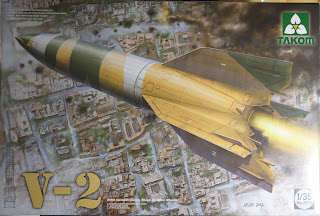 I made the 1/72nd scale Revell model earlier this year and wrote about it on this blog.

There is no question that the V-2 was an enormous technological achievement by Werner Von Braun. He later worked for NASA and received much of the credit for the Saturn V, his Nazi past and war record using slave labor forgotten.  The design survived for many years, e.g., the Scud missiles off Gulf War fame were basically advanced V-2 missiles.  The V-2 was both the first man made device to travel at supersonic speeds, and it was also the first man made device to leave the Earth and enter near space.

I have read that while the Germans launched over 1,000 of these at the Allied forces in the West and also England itself, they had little or no effect (except of course the direct victims).  And amazingly the Germans still were thinking that these so-called miracle weapons would reverse the situation and save them from the avalanche of military power cascading down on their country from East and West.


The finished model is 16” tall without the launch stand.  This was a big, powerful missile.  It is no wonder it was the first man-made object to leave the Earth’s atmosphere, and it was the first such object to travel at supersonic speeds.  It was a technological achievement, no doubt about it.

To duplicate the splinter camouflage pattern, I painted white, green then yellow last.  Normally, one might well pick yellow as the second color to apply, but the masking job to do that would have been very extensive.  That was my approach.

There are five color schemes to choose from.  Many YouTube videos show the V-2 being launched, and almost all of them are in the black and white test version color scheme.  I have seen a few with the splinter scheme, and many of the captured V-2 rockets are in a dark overall color, probably a dark green.  Who knows at the end of the war?  They were trying to hurl these missiles at the Allies as fast as they could, but apparently to little avail.  There probably was not enough time for fancy camo jobs to be applied.  I painted the launch platform RLM 66 Grey.  It just seemed logical.  The instructions are silent on the subject.

The small sheet of decals were very easy to work with.  They release from the backing paper quickly and respond to Tamiya Markfit Strong Decal Solution.

The four fins needed some filler, which was easily taken care of with Vallejo Putty.  There is a seam between the two upper halves that I did not fill.  This is because in my research I saw photos of an unassembled V-2 that showed the outer shell splitting into two halves just like these model parts.    For once, the seam is scale accurate.

In a couple of places the printing on the instructions is very small.  It is as if the pages were designed in a larger format than they were printed on.  My regular magnifier hood took care of that.

The plastic was very slippery out of the box.  I assumed it was mold release agent, and I gave the parts a good soak in warm water and Dawn detergent.  The parts felt much different after that, i.e., not slippery at all.  Since so much masking is called for on this model, I wanted to start with a clean and grease free surface.

Basically, there is nothing major to talk about.  The above are really kind of nitpicks. 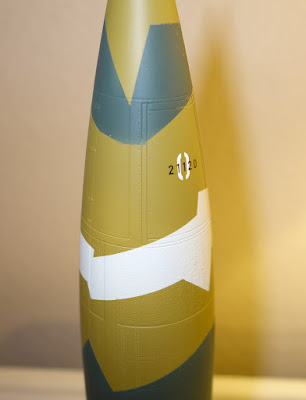 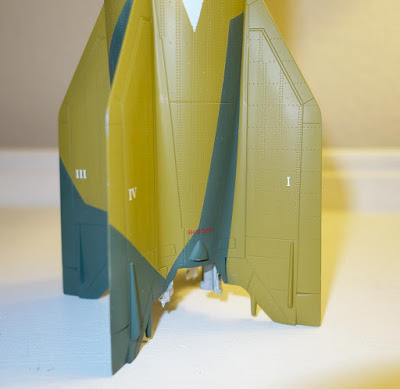 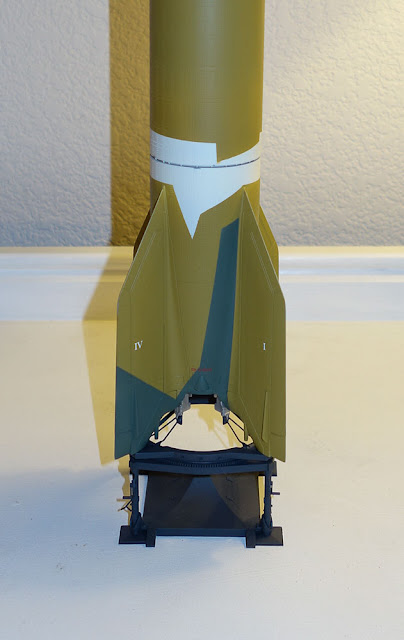