My Time In Model Building

When I was growing up in the late 50’s and early 60’s, all of my friends built models, generally Revell and Aurora plastic models and some Comet and Top Flite balsa rubber powered models.  Some of us built flying models powered by glow engines, either free flight or U-control.  This was long before practical, inexpensive R/C.

For most of us, cars, girls and rock ’n’ roll came into our lives and model building went away.  I had built some cars in early high school years, and once when I was going to be stuck on weekend CQ duty in the Army, I picked up an AMT 1/25 model of some car at the PX and spent some time that boring weekend building it.  (I have no idea what happened to it.)

Flash forward a decade.  After a tour in Vietnam, college and law school, I was a newly minted Deputy Special Prosecutor in New York City enjoying my first year of freedom from the unimaginable workload and drudgery of law school.  One evening I was in an E.J. Korvette department store in Brooklyn, NY looking for a Christmas gift for my then fiancé (and I thank God in Heaven that 43 years later she is right here still putting up with me).

I was thinking toaster oven, and I took a shortcut through the toy department to small appliances.  And right there on the shelves were plastic model kits, something I had not looked at in more than a decade.  Standing right out was a stunning picture of a P-40E Warhawk plunging down on apparently unsuspecting Japanese Betty bombers.  Revell always always had stunning box art.

The toaster oven was secured, I went back through the toy/model department and started looking at the kits.  When I saw the Revell 1/32nd scale P-51B in Capt. Donald Gentile’s markings, I plucked it off the shelf.

And, I was on the slippery slope.

The was way back in 1976.  Monogram was still in business turning out new kits of really interesting subjects, like the B-26 Marauder and the B-25H Mitchell.  Microscale was providing dozens and dozens of decal sheets to replace the (unfortunately) rather crappy ones that came with the kits of the time.  Monogram was great, but their decals were beyond awful.

Microscale also had a two solution system for applying decals and making them look as if they are painted on.  They are still selling the same solutions today, and they still work beautifully.

Testors was beginning to supply paints in Federal Standard numbers.  And, Polly S was producing the first acrylic paints I had seen.  I never did get them to airbrush very well, but regular hand brushing them could not be beat.

And, speaking of airbrushes, I discovered them and taught myself to use it.  My first was a Badger Model 200, which I still have and use.  It is a single stage unit, and has been used so much it has been back to Badger for a re-build twice.  That tool will outlast me!

But what drew me into all this?  It is the sense of satisfaction I get out of researching the subject and then producing the best and most exact a replica I can.  I have become what I call an “amateur historian” of the Second World War.  My subjects tend to be replicas from Guadalcanal and the Cactus Air Force, Stalingrad, the Battle of Kursk or the Battle of Britain.  The list goes on and on.  I occasionally wander off into Vietnam, and build something such as the Grumman Bearcat I made with French markings as a personal commemoration of the incredibly brave French military men and women who fought to the bitter end at Dien Bien Phu in 1954, or the U. S. Army M551 Sheridan tank with the markings of an Arizona Sergeant who commanded the tank in our Vietnam War (said marking obtained from the IPMS/USA convention here in Phoenix a year ago).

I am not among the best model makers in the world, I enjoy putting most of my work up here for the few modelers who drop by now and then.  These modelers are from all over the world, and not a few from Russia (a country I visited in 1990 and 1991 during the waning days of the USSR and will never forget).

Model building has been a rewarding and involving pastime for me.

And when I look at the new kits and materials available today (e.g., the Tamiya P-38E/G Lightning in 1/48th scale), I realize that in the world of scale modeling, these are indeed the good old days.

I know that I have not posted anything here lately, and that is because I have not been spending as much time at the workbench.

However, I am just finishing up an Eduard P-400 Airacobra and will be posting details here shortly.  Here it is almost done: 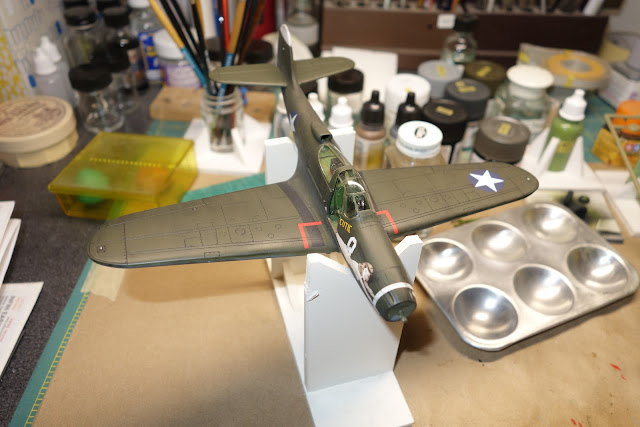