I love that title – weekend indeed.  Well, if I had 7 day weekends that would work.  I am sure some of you are not as plodding as I am.  As you all know, it means you get the sprues and decals for one model.

The Cactus Air Force referred to the air group that occupied Henderson Field on Guadalcanal in 1942.  Eventually, it sported Marine, Navy and Army Air Forces aircraft.  They operated under horrific conditions which included almost nightly shelling by the Japanese Navy as well as living in crude tents and eating captured Japanese rations.


The Second World War is my main modeling interest, and the Cactus Air Force and Operation Torch (the invasion of North Africa) are of particular interest to me.  Maybe it is because Guadalcanal was so much like our struggle in Vietnam (where I served while in the U. S.  Army) that it captures my attention.  Operation Torch interests me because my late and beloved father-in-law started his war there and eventually took him to Sicily and Italy.

I purchased this kit as I wanted to build another Eduard model, and it of course had markings I wanted.  Being a new returnee to the modeling fraternity, I have been struck at how detailed these kits are, and how many tiny parts need to be dealt with.  I really like the surface detail and the cockpits Eduard produces in their kits.

I painted this one with Model Master Acrylic paints, but I had some trouble.  I did not thin the paints enough, and probably had the pressure up too high on my compressor, so a got a fairly grainy surface when I sprayed the dark brown.  Actually, it was very grainy.  I had to take some very fine emery paper and sand it down some and re-coat it.  The finish was still not that good.  A few coats of Future helped, but I still regard the result as being a “two foot model”, i.e., it is best viewed no closer than two feet!  Oh, well…lesson learned.

I did use Eduard canopy masks for the first time, and I hope to use them on everything in the future.  The results were excellent.  They are well worth the cost.

Once other “new” (to me) product I used was Perfect Plastic Putty, which is water-based.  You can smooth it in with a damp Q-Tip, and it does not shrink when dried.  Much easier to use than Bondo or Squadron Green Putty.

It spite of the issues I had, I enjoyed the build.  And, my skills are getting better. 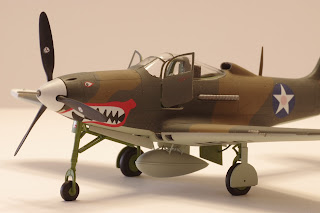 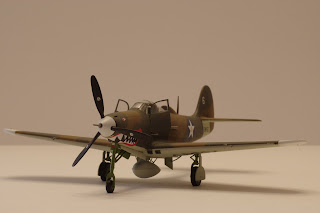 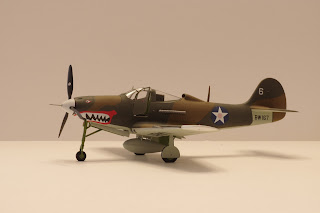 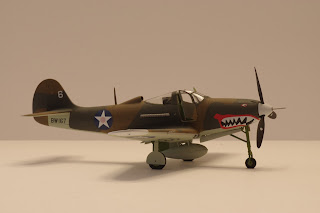 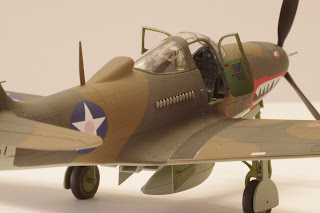 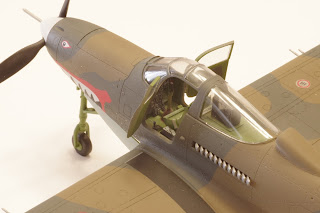 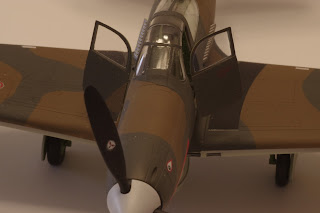 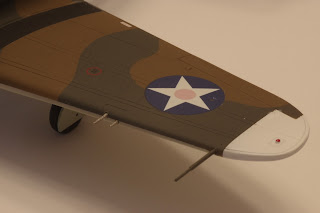 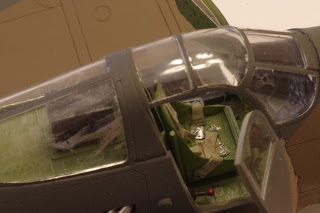 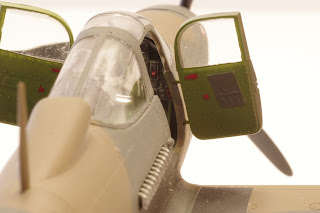 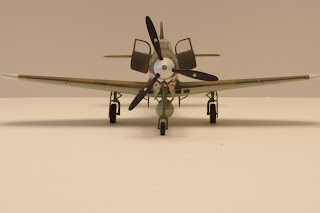 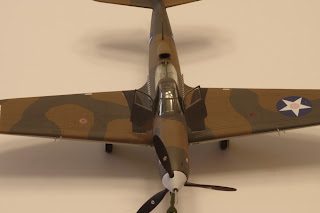 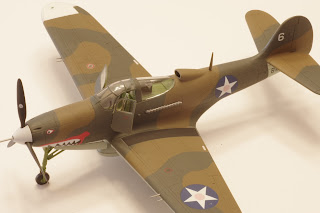 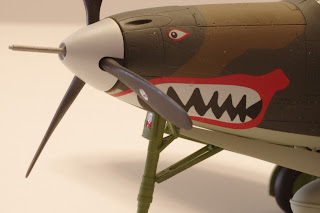 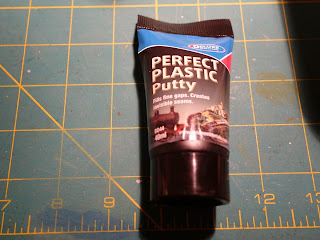 Great for filling gaps without sanding.
Posted by Matt at 2:48 PM No comments:

Hannant’s in the UK and Pounds/Dollars Exchange Rate

Recently, looking over some financial/investment material, I saw that 1 British Pound equaled 1.52 US Dollars.  I don’t get involved with foreign transactions, but the business news has been talking about how the relatively high price of the US dollar is constricting our exports.  That of course means imports must be up.


As it happened, I had just been perusing the websites of my two favorite domestic suppliers (Sprue Brothers and Squadron), and they were both out of stock with some Eduard masks I wanted.  I recalled seeing adverts for Hannant’s in the UK, so I went to their website.


It turns out they had both mask sets, and with the conversion to dollars (their website does it automatically if you want the prices in dollars) the mask sets were less expensive than they would have been if they had been in stock at my domestic suppliers.  (I get great service from both suppliers, but if they don’t have it in stock, I can’t buy it.)


I ended up ordering the masks and some Xtradecals.  The postage was $6.31 airmail to Arizona from the UK.  My order arrived in a week.


I paid with PayPal.  They just deducted the pounds from my account converted to dollars at the then prevailing rate.  No surcharge involved, as might happen with a credit card (I have had that happen with credit card transactions is foreign currencies).  I would assume most of us have PayPal accounts as I am sure most of us occasionally do business on eBay.


In another order, I bought a kit and the postage was equally reasonable, the packing was very well done, and it came in a week.  Yes, the kit was less than it would have cost here.


Until the dollar weakens against foreign currencies (these rates are in constant flux), you may find that shopping in the UK is a very good deal.


Hannant’s has a stunning inventory.  I was amazed at the variety of kits and accessories available.  If you have never checked them out, you should do so.  (http://www.hannants.co.uk/)


If I could, I would buy everything locally, but that is not possible.  Even here in the Phoenix area (our 5th largest metropolitan area), there are only two decent plastic model hobby shops.  To get to them, I have to drive a one hour or two hour round trip.  And they simply can’t stock all the stuff I might be after.  The plight of the specialty retailer in the Internet might be the subject for another day.

After spending nearly 40 years in my career (lawyer), I have retired to Arizona.  We lived in Maine, but elected to spend our “Golden Years” away from the horrible New England winters.  We traded for toasty Sonoran Desert summers.


I now have time to get back to making scale models.  Over the years, I kept my “stash”, but have not added to it for a few decades, until now.  Several things surprised me.  First, the very high quality of the work being done now by modelers is amazing.  Second, the fact that the kits of 1990 are still out there in new boxes with new decals.  Third, the “after market” has grown so much.  Fourth, the fading out of enamels in favor of acrylic paints.  Fifth, the Internet makes research a snap.  I have  bunch of Detail & Scale and In Action books (no longer $3.95), but now I don’t need them.


My stash included an Otaki P-40E, which was pretty much state of the art when last I built a model.  Now, it is pretty dated.  But so am I, I suppose.  There is not much to say about it.  The decals came out of my collection.  I added an Ultracast seat with molded-in seat belts but nothing else.  It is painted with Model Master Acrylic paints.  I masked the canopy with Bare Metal foil, but it left a residue I had to remove with paint thinner and a Q-Tip.  I found that by priming the model with Vallejo Grey Surface Primer (an acrylic/polyurethane product), I was able to use Tamiya masking tape with no issues of the paint pulling up.  That used to be an issue years ago with Polly-S sprayed on plastic.


The model represents a Kittyhawk Mk IA of the Royal Australian Air Force, 77 Squadron, Goodenough Island, New Guinea, in 1942.  It was the aircraft of Squadron Leader Richard Cresswell.  Since I was a kid, the P-40 has fascinated me.  It was a real workhorse in the Pacific and the Western Desert.
My goal will be to add regularly to this blog.  I am experimenting with new (to me) paints and other products, and this will serve as a journal for myself if nothing else.  I hope someone else finds it useful. 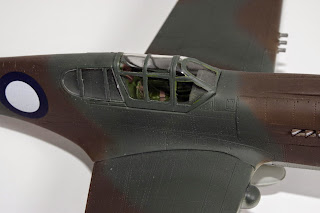 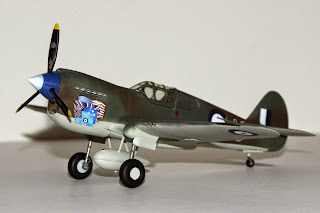 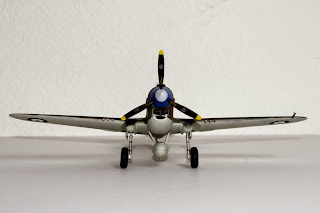 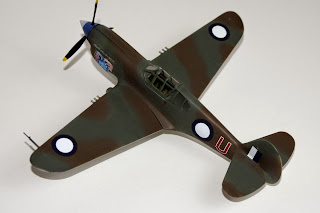