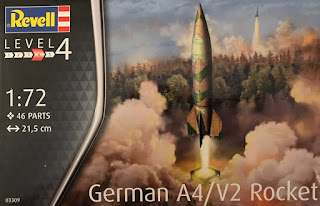 This kit has been around for some time and is originally a Special Armor (CMK) 2013 release that was reboxed by Revell in 2018.   I thought this model would be a unique addition to my collection.  Since its availability here in the USA is spotty, I ordered it from Hannant’s in the UK (who seem to have everything almost all the time).

I built this kit as a quick, easy project before I plunged into something more complex.

Much interesting information about the V2 (which was the first manmade object to actually go into space) is available on line.   One interesting story is how the Germans tried to use the missile tactically against the bridge over the Rhine River at Remagen.  They fired off a bunch of these missiles hoping to hit the bridge, and one even got within 400 yards.  The rest just blasted more of the local town and the German countryside.  There was a crude guidance system in these missiles, and they were essentially unstoppable once launched.  However they were by no means accurate, but still capable of inflicting serious damage where they did come down.

There are two sprues and a small decal sheet.  The 11 page instruction book is beautiful with clear drawings in full color with four color profiles for finishing.  The parts are very detailed and go together well. No filler was required anywhere.

The splinter camouflage pattern took the most time to complete.  It continues to amaze me that the Germans wasted so much time on intricate camouflage patterns. We seemed to have done rather well with simple coats of olive drab.

I used the following paints:


As always, thank you for visiting my blog.  Comments are always welcome.
Posted by Matt at 6:59 PM 4 comments: 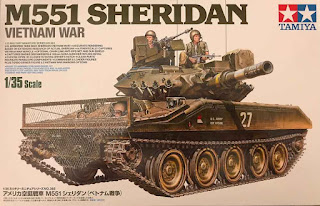 The Sheridan came about to fit the perceived need for a tank that could be air dropped.  Of course it would be nice to air drop tanks with the airborne troops, but weight is the issue.  Heavy things require large airplanes to transport them, and tanks require lots of (heavy) armor to protect them once engaged.  These two necessities work against each other.  I was in Vietnam several years before the Sheridans were deployed there.  But we had quickly learned that an RPG could ruin your whole day, and that using common chain link fencing could protect our vehicles.  I saw M113 APC crews deploying fencing around their vehicles for just that reason.  The RPG would strike the fencing, explode and spare the vehicle.  Or, that was the theory.

Here, Tamiya has modeled a frame and fencing shield on the front of the M551.  This was an in-theater installation.  Tamiya supplies some plastic screen material for you to cut out from a pattern.  I decided to go with the Eduard Anti-RPG Wire Net #36408, which looks like cyclone fencing and not large window screen.  Some tanks, of course, did not have these installed, possibly even the tank I modeled.

Speaking of the tank I modeled, I attended the IPMS Nationals in Phoenix last year, and attendees were given a decal sheet, as usual.  The sheet we received included decals for this tank in 1/72nd and 1/48th scale.  “Arizona” was the tank of Platoon Sergeant Vega of Nogales, AZ.  (The second model on the sheet is the Spad flown by AZ notice Lt. Frank Luke,  after who Luke AFB is named.)

The Sheridan, in spite of its rather spotty active duty record has always fascinated me.  Tamiya’s last stab at the Sheridan was decades ago.  There is not one thing, I am told, in common between the two kits.  This kit is a typical new Tamiya kit.  However, I found it more involving a build than I first thought it would be.  There are lots of parts, and in several places you will need to drill .5mm, 1.0mm and 1.2mm holes, so make sure you have some small drills handy.

The figures are outstanding.  I think they are every bit as good as most resin offerings.  There are three.

The instruction manual is superb.  Also included is a pamphlet “M551 Sheridan in Vietnam” by Specialist Doug Kibbey that is full of information on the combat deployment of the Sheridan written by someone who really knows.  This includes color profiles for the two Sheridans the marking for which are supplied in the kit.  And, finally, there is a Background Information.  All of this material is multi-lingual.

As with all the recent Tamiya releases, this kit is 100% state-of-the-art.  There is absolutely nothing to criticize. 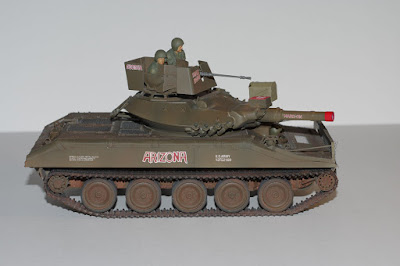 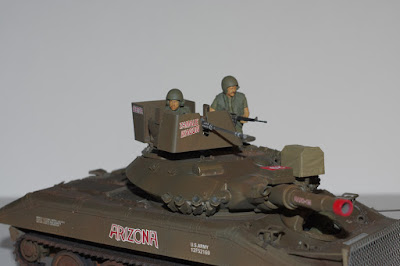 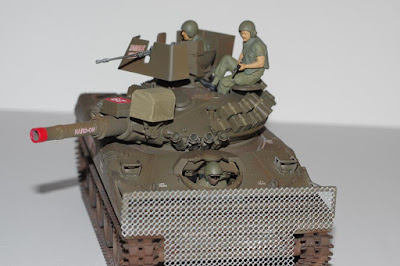 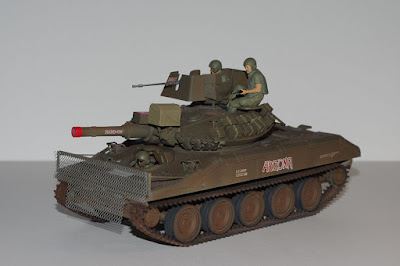 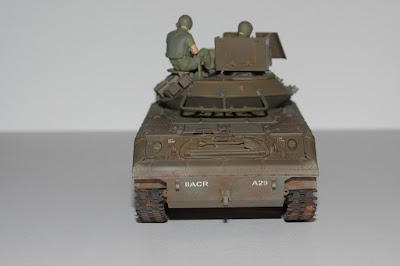 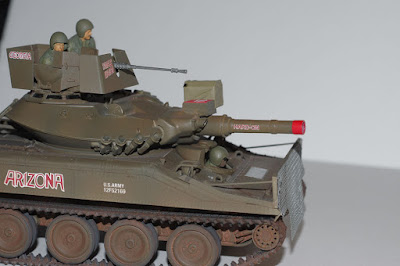 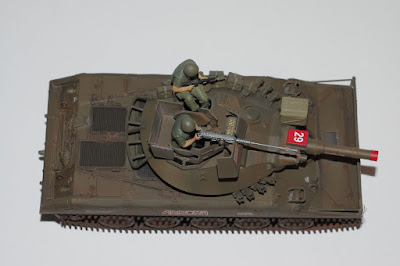 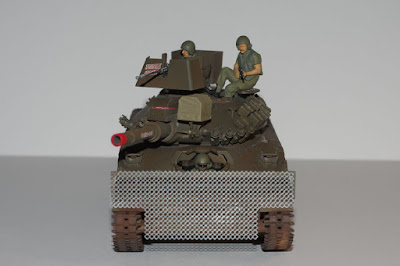 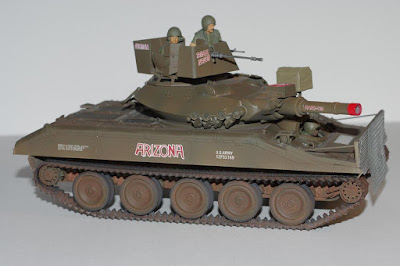 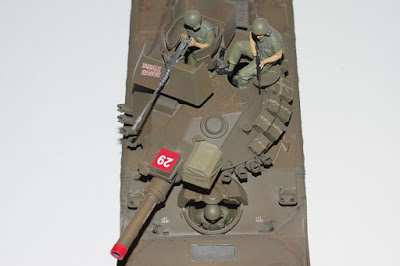 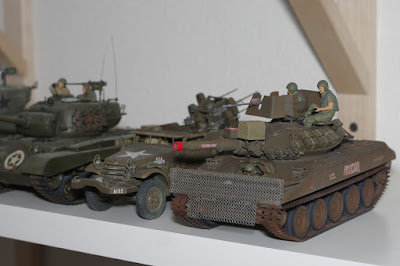 Here is a list of the main paints and weathering materials I used:

I am no color expert, and my memory of these colors is decades old.  But they looked right to me.  Besides, in the field, equipment and people get really filthy.  The tropical sun fades everything.  Whatever color the clothing and equipment was delivered in did not last that long.