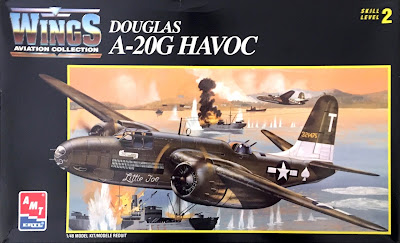 In the early 1990’s, FineScale Modeler magazine ran their annual survey asking what aircraft the readers would like to see “kitted” and in what scale.  The decided majority said an A-20 Havoc in 1/48th scale.  That was the No. 1 choice that year.  And, in 1994, it appeared, but from an unlikely source - AMT, the car kit manufacturer. This kit has been in my stash for quite a long time, although not since 1994 as I have the AMT/ERTL version, which came along years later.  (This was during my kit collector phase when I was doing all sorts of other things other than building.)

Why so many requests for the Havoc?  Who knows?  It was on my list of wants probably because they look so fascinating.  The aircraft had a single pilot, two huge radial engines and they bristled with guns.  There are many famous photos of Havocs attacking Japanese ships in the South Pacific with guns blazing and bombs skipping into exploding ships.  There are also Havocs that served with the RAF Desert Air Force.  The USSR Air Force received the lion’s share of Havoc “G” model production.  But still, the Havoc was not as famous as the B-25 Mitchell or the B-26 Marauder.

Over the years, I collected some aftermarket items for this kit.  The first was decals from Superscale, , No. 48-1168, A-20G Havocs.  Then, the wheel and life raft resin set from True Details.  And when I recently decided to build the kit for real, I obtained a resin pilot’s seat by RESIN2detail (from eBay) and Quick Boost gun barrels (also via eBay).

And, of course, a set of Eduard masks, which are a necessity for a model like this with the amount of glass one has to cover.  I even use Eduard masks on little 1/72 scale fighter.  They save so much time and hassle. 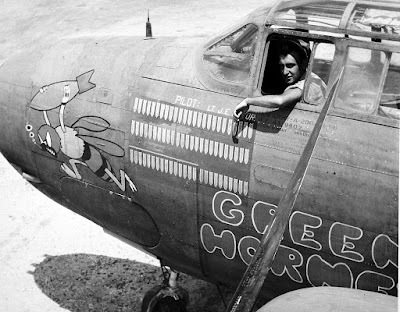 Life raft?  Yes, refer to the photos of the area behind the pilot’s seat.  There is a yellow life raft on that shelf.  Considering that those aircraft operating with the USAAF in the Pacific were over water constantly, I am sure the rafts came in handy for downed crews. 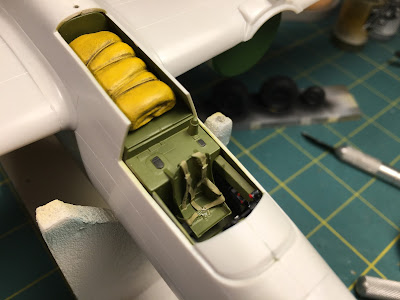 And this is a curious thing about this kit.  There are some areas when the kit (now nearly a quarter century old - okay - excuse the hyperbole) where there is a lot of detail, like the gun turret.  The cockpit is fairly well detailed.  They even included a long-range tank for under the fuselage (that would have been used for ferrying the aircraft as it blocked the bomb bay).  So, why leave an empty shelf behind the pilot's seat where there is a glaring empty space for all the see and not include the life raft?  It is almost as if someone interrupted the mold makers and said “Speed it up and stop wasting time on too many details.” 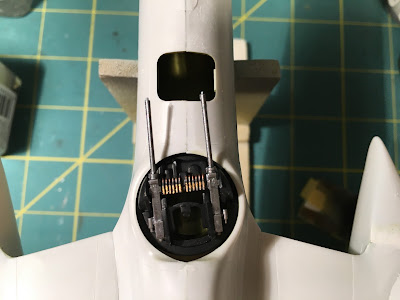 By the way, AMT issued a 1/48th scale kit of the B-26B Marauder just at the same time Monogram released theirs.  I wonder how good a kit it might be?  They show up on eBay now and then. 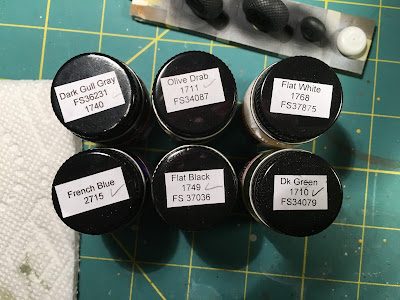 I think I will go back to Vallejo.  I have trouble finding the proper ratio of thinner to paint with some Model Master Enamel or Acryl colors.  For whatever reason, I have an easier time with Vallejo Air paints.  And cleaning up enamel paints is too smelly.

Last year, I completed a Monogram 1/48th scale B-25J Mitchell.  I expected the Havoc to be a similar kit.  It wasn’t.

First, the surface detail is finely done recessed panel lines, not the raised lines of the Mitchell.  The detail on some parts is better on the Havoc, and generally more finely detailed than the Mitchell where they chose to detail the Havoc.  The Mitchell’s wheels are much more realistically molded, however.  And the Mitchell bomb bay is reasonably detailed, while AMT left the interior detail out on the Havoc.  The Havoc has a few bombs linked together on an non-scale frame but no side wall or ceiling detail.  That is one reason why I left the bomb doors closed on the Havoc.

Second, the fit of the Havoc parts is far better than the Mitchell.  I used very little putty on the Havoc, and the engine nacelles fit the wings rather well.  The Mitchell required a fair amount of putty.

To be fair, the Mitchell molds are about 17 years older than the Havoc.  And, neither kit is a bad kit and both look great when finished. 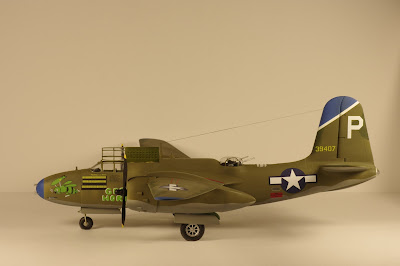 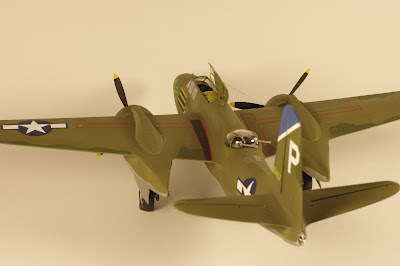 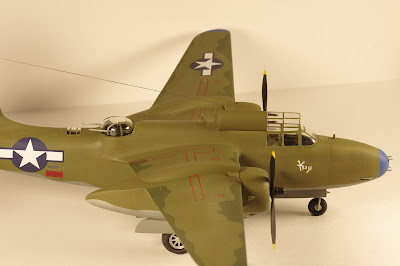 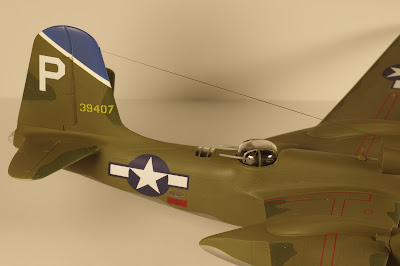 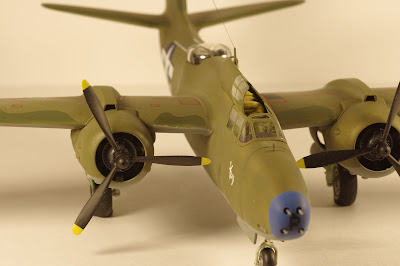 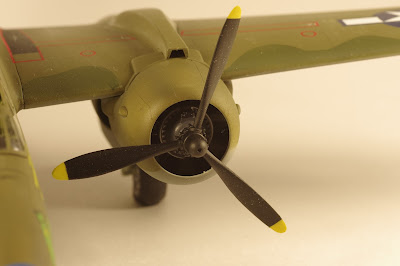 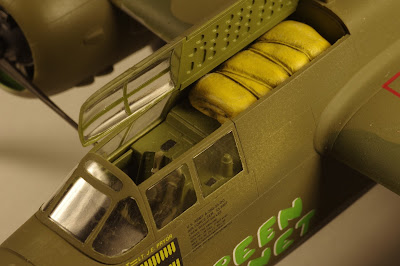 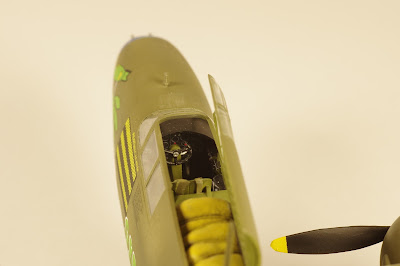 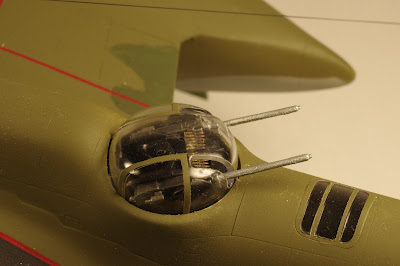 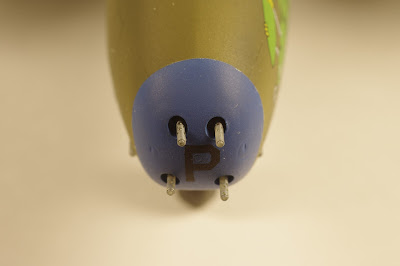 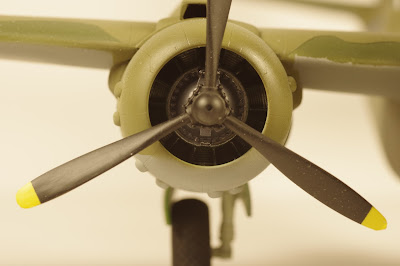 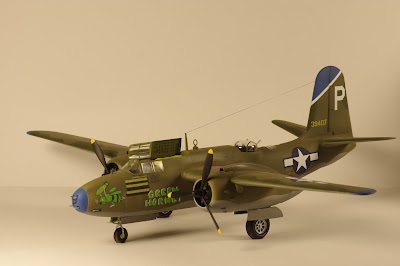 As always, thank you for looking.  Comments are welcome.