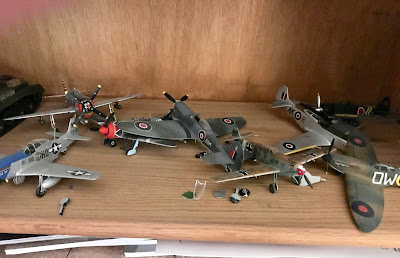 The lead photo may look a bit strange.  This is what happens when one foolishly allows the family cat (a 15 pound yellow tabby named Mr. Rudy) to snoop about the model room and he sees a spot three feet off the floor to explore.  I call it the Cat-astrophe.  Mr. Rudy jumped and landed right in the middle of my slowly growing 1/72nd scale collection.

A number of models were damaged beyond repair, including an Airfix P-51D in RAF markings I had previously presented here on this blog.  (Upper right in photo) It was such a nice little kit and such fun to build, I decided to do another one.  And, the Xtradecal sheet had many more aircraft markings to select from.

This iteration of the Airfix 1/72 scale Mustang comes with markings for a USAAF blue nose Mustang of the 352nd Fighter Group.  It is the same mold they have had in their catalog for a few years now.

How does it compare with the Tamiya kit, which I have also presented here?  In terms of detail and fit, Tamiya wins.  No surprise there.  However, the Airfix kit is nicely enough detailed and many dollars cheaper.  I enjoy building both manufacturer’s kits.

My biggest complaint about Airfix is the panel lines are too wide and deep.  I recognize that more precise and detailed surface detail would add much to the cost of the kit, so I live with it depending what I am looking for.

If I want a model that takes me months (off and on) to build and wow everyone with the result, I would start with the Tamiya.  If I am looking for a quicker build to add a particular aircraft to my collection (like a natural metal US aircraft in RAF markings), I am happy with Airfix.  I am in this hobby to have fun.  Airfix kits are fun to build.

Another point about Airfix is that the plastic is soft and the sprue gates are wide resulting in difficulties with separating the parts from the runner without damaging the part’s surface.  For example, the radio antenna (not an example of the mold maker’s art in the first place) was impossible to remove without damaging it beyond repair.  The one on this model I fabricated from sheet styrene.

And, sharp eyes may note there is no pitot tube on this model.  It suffered the same demise the antenna did the I tried to remove it from the sprue and since it is on the bottom of the right wing, I simply left it off.  If it had been on the leading edge, I would have made one from stretched sprue.

All the above being said, I am still very happy with the result or I would not be publishing it here.

Here are the paints I used:

I have been very pleased with the Vallejo Metal Color paints used in conjunction with their Gloss Black surface primer.  It was easy to achieve a natural metal finish and use the darker duraluminum for the panel around the exhaust pipes and the gun cover panels in the wing.  These paints are the first product I have used successfully to achieve a natural metal finish.  And, you can mask over the metal fish with Tamiya tape or Post-its with no fears of lifting the metal paint when removing the masking.

I use the Tamiya Panel Line Accent Color to bring out the surface details, and I am happy with the way it looks.  Somehow it gives the finish a more natural look.
Decals
Xtradecal X72131 P-51D Mustang Mk IV in RAF, RCAF and RAAF service provided the markings.  I chose the markings for No. 154 Squadron at RAF Hudson in March 1945.  According to Wikipedia, the squadrons that received the Mustang Mk IV (i.e., the P-51D) only had them during the final two months of the war.  How long they remained in service with the RAF after that, I do not know.  Since demobilization was fairly rapid, I doubt many of them were in active service by the end of 1946. 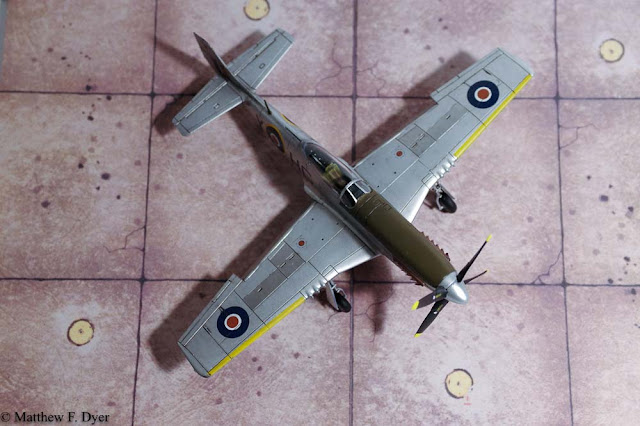 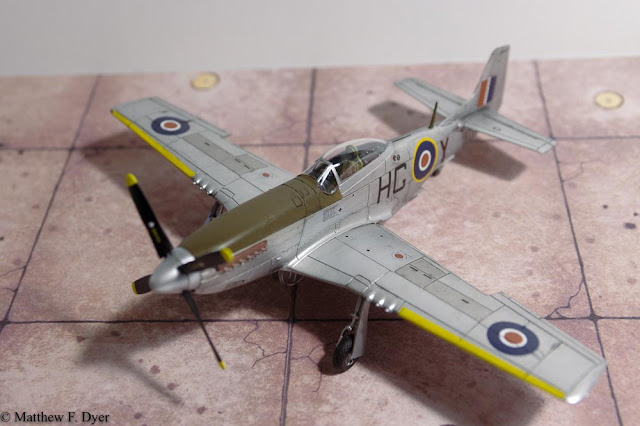 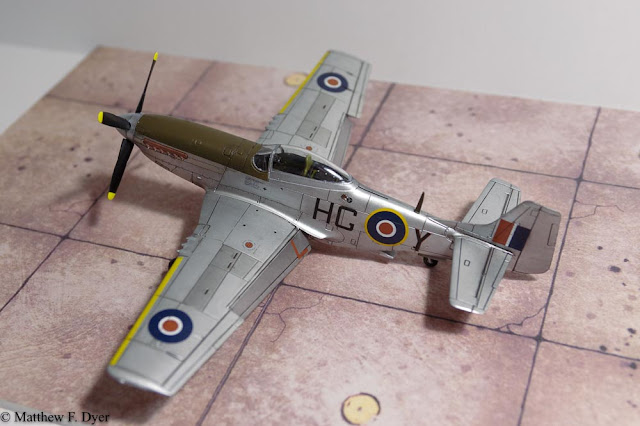 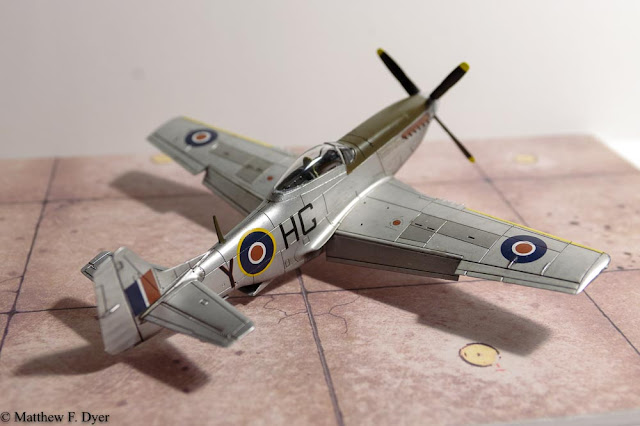 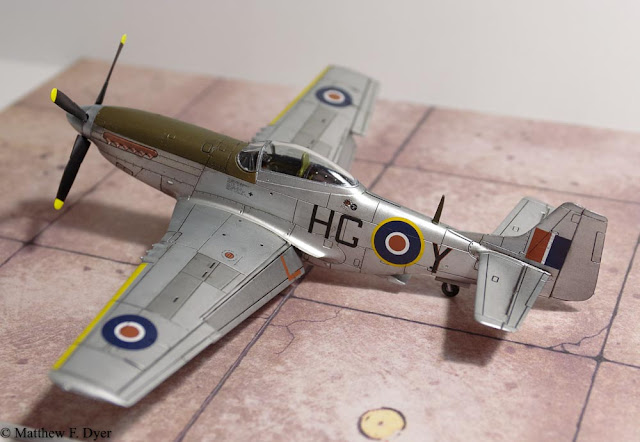 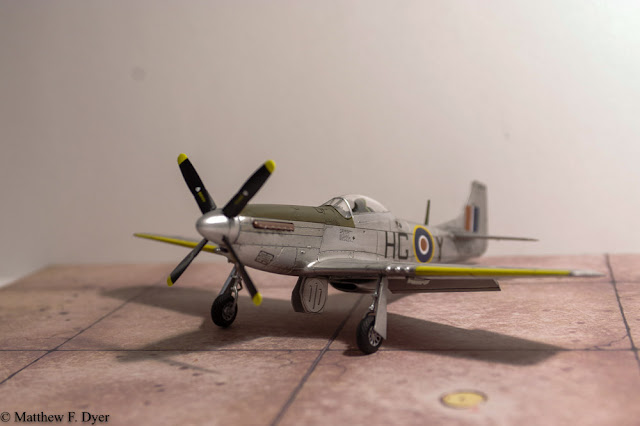 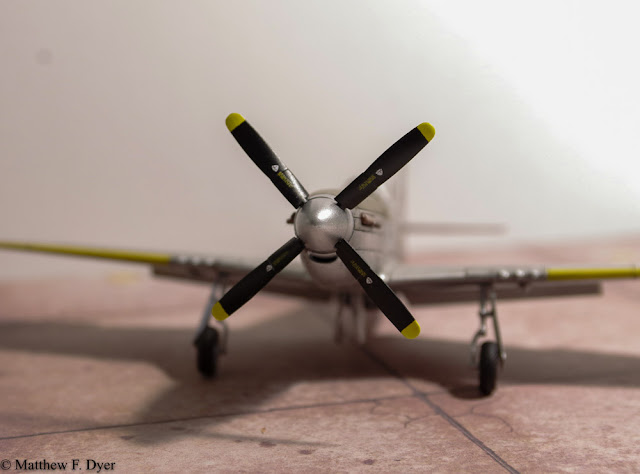 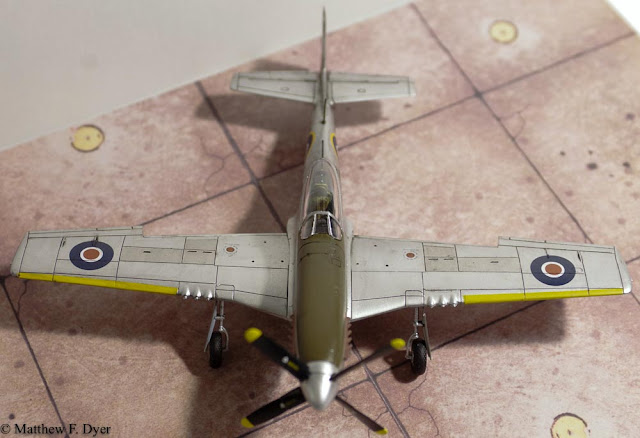 As always, thank you for visiting my blog.  Comments are always welcome.
Posted by Matt at 10:49 AM No comments: