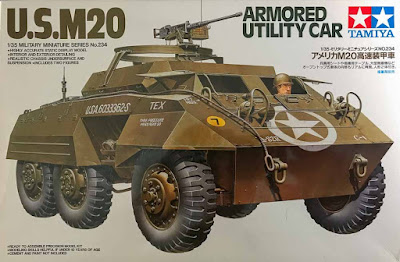 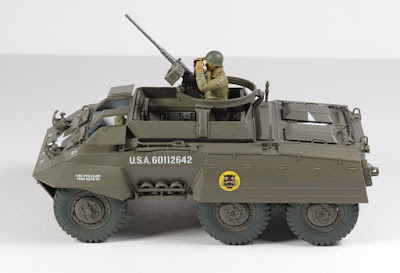 Originally, the M8 Greyhound was adopted by the U. S. Army as a light anti-tank and reconnaissance vehicle armed with a 37 mm cannon in a turret on top of the vehicle.  The cannon proved too light to penetrate German armor, and the British were uninterested as the bottom of the vehicle was weak and offered no ineffective protection from landmines.  Therefore, the M8 was removed from anti-tank service and used for infantry support and as cavalry screening, where it proved successful.

The M20 was essentially the same vehicle and was used for reconnaissance and as a command vehicle.  It was low, fast (55 mph maximum speed) and provided protection from small arms up to .50 caliber.  The M2 .50 caliber machine gun it carried was mounted on an anti-aircraft ring, and it had a light armor aggressive punch via the Bazooka it carried.  A total of 3,680 M20s were built by Ford Motor Company during its two years in production (1943–1944).  See https://en.wikipedia.org/wiki/M8_Greyhound.

The M20 may not be quite as sexy as the cannon armed M8, but they were seen all over Northern Europe and Italy with U. S. Army units.  Both these vehicles are examples of American ingenuity in bringing new weapons to the battlefield in record time in record numbers.  Many of them soldiered on with foreign countries for decades after the war.

A 1999 release, this kit is virtually the equal of current releases.  It includes the M2 machine gun, M-1 Carbine crew weapon and landmines on exterior racks.  Also included is the Bazooka that gave it an anti-armor capability.  The crew compartment is nicely detailed, and the suspension and drive line are nicely represented underneath.  A driver figure and a commander figure are included.

I looked at a bunch of photos of the M20 on the Internet trying to figure out if in WWII these vehicles had the driver’s compartment painted white.  With the M8 Greyhound, the inside spaces of the vehicle were painted white, as it had a turret on top and no open fighting compartment as the M20 had.  Most restored M20 vehicles seem to have been painted white, but that can be misleading.  I did find a few contemporary photos that showed a much lighter driver’s compartment, so I went with white on my model.  It makes sense because once the hatches are closed, it would have been somewhat dark in there.

Recently, I have built a few armored models with link and length tracks.  Once the tracks, bogies and drive sprockets are assembled together, it is almost impossible to paint all those pieces the appropriate colors.  When the tracks are off it is easy.  But when I try to wrap the painted tracks around the various wheels, they invariably break in a few places.

So, I have taken to painting and assembling the tracks on the road wheels, mounting side skirts (if any), and then masking those assemblies off while I paint the upper parts of the model.  This prevents overspray getting all over the tracks and road wheels messing up the paint job on them.  Works well for me.

With this model, there was a similar issue with the six wheels.  I painted the tires and wheels, but the armored skirts had to be added after the wheels are mounted to the axles.  I mounted the wheels after I masked them with some aluminum foil, and then I glued the armored skirts on.  The foil was easily removed after I was done painting.  See the photos below.

For whatever reason, I liked the look of this model freshly painted, so I did not add any weathering other than some dust pigment on the wheels.

Includes all the small arms that would normally have been in the TO&E for this vehicle.

A nice model that filled a very important reconnaissance and command role for the U. S. Army in Europe during WWII. 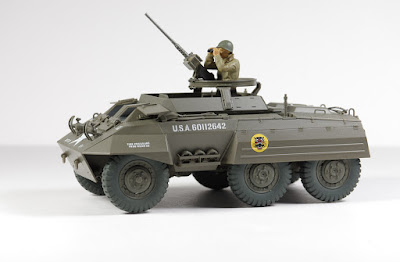 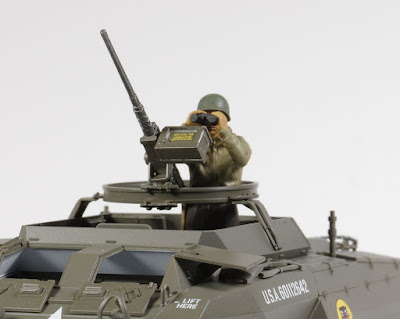 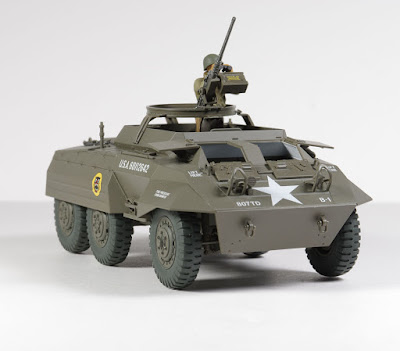 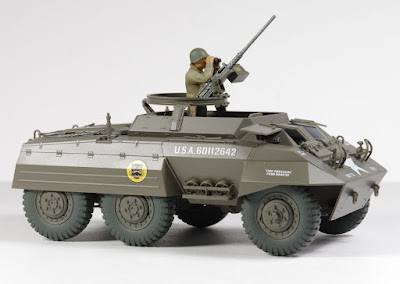 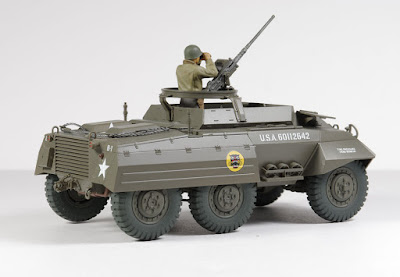 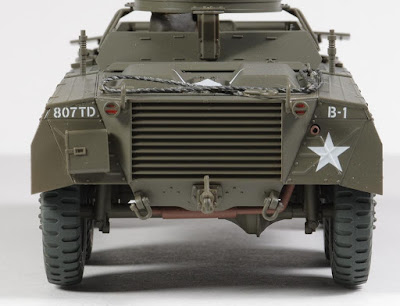 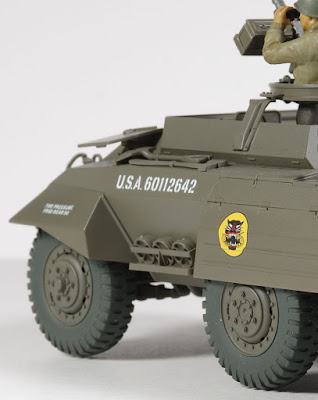 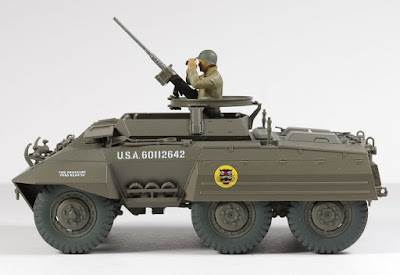 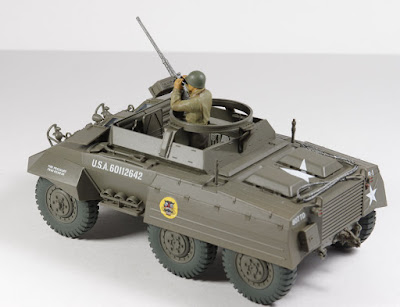 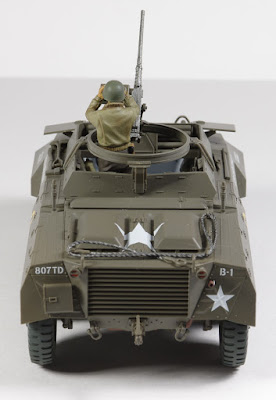 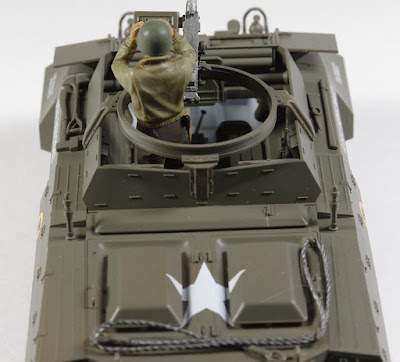 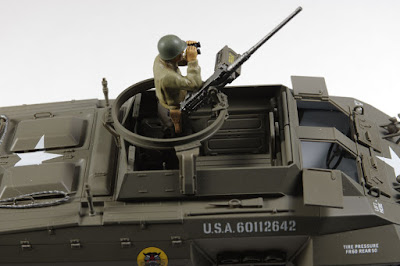 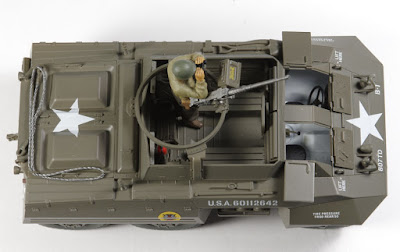 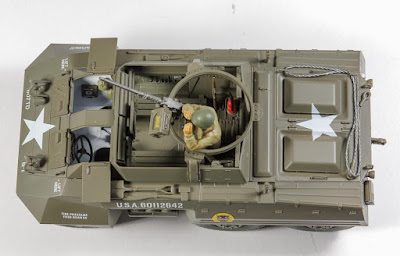 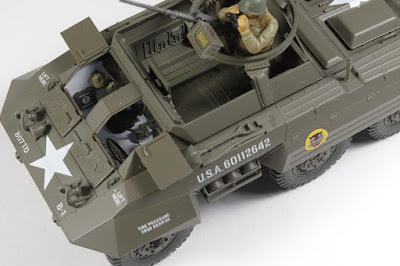 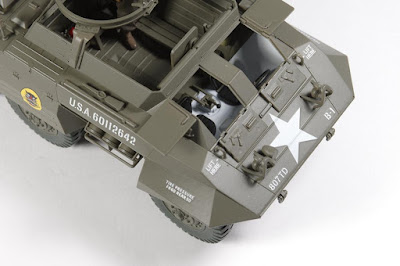