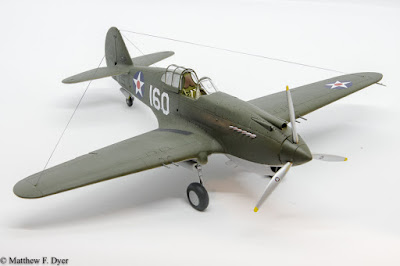 Many 1/48 scale modelers were waiting somewhat eagerly for Airfix to release this kit after it was announced.  Prior to this kit entering the market, we had only the ancient P-40B from Monogram (accurate in outline, but lacking in cockpit detail and being cover with the hated - by some - raised panel lines) and the lamentable P-40B/C from Hobby  Craft (which had a very inaccurate outline and not much of a cockpit either).

We were not disappointed with this new Airfix release.  Recessed panel lines, which are lighter than the early “new” Airfix kits,  grace the exterior.  The very detailed cockpit and wheel wheels with canvas covers, very nicely molded landing gear (both extended  mode and retracted), and a radio set in the aft fuselage with an access door that can be left open or closed kept me from thinking of any after market items (aside from the seatbelts).

All P-40’s (at least through the E model, to my knowledge), had a ring gunsight on the engine cowl in front of the cockpit.  This detail is absent in this kit and not shown anywhere on the illustrations or plans.  I do not see how these could have been molded in plastic, so I submit Airfix just saved the modeler the frustration of fooling with this detail.  Maybe in 1/32d scale, but not i/48 scale.  My collection of aftermarket parts includes and old Waldron steel etched set of ring gunsights in 1/48 and 1/32 scale.  I frankly admit that the set in 1/48 scale is simply too small for me to deal with.

A very complete decal sheet with markings for both a Pearl Harbor based Curtiss P-40B Warhawk and a Flying Tiger Curtiss Hawk 81-A-2. The latter being the same aircraft but painted in RAF colors and turned over the the Chinese Air Force for use by American Volunteer Group.

I chose the Pearl Harbor markings for one of the first American aircraft to engage the Japanese in WW II.

This is a fine kit and I highly recommend it.

Tamiya Olive Drab XF-62 and Sky Grey XF-19 were  used for the basic overall colors.  These aircraft were well-maintained and therefore, I did not weather the model very much.  I did use Tamiya Weathering Master Dry Brush Effect colors for exhaust stains on the bottom and aft of the exhaust manifolds as well as metallic effects the gun barrels and pitot tube.

The cockpit was installed stock except for some Eduard STEEL seatbelts.

I do not recall using Tamiya Color Acrylic Paint over canopy frames before, but I did here, and will probably do so in the future.  I always carefully clean the canopy with alcohol before applying the masking.  In this case, I was using a combination of Eduard canopy masks (designed for the Hobbycraft P-40B) and Tamiya tape to mask areas not covered by the Eduard masks).  I sprayed several light coats of XF-62 Olive Drab on the canopy parts (which were not attached to the model).  The pleasant surprise came when I removed the masks.  The paint stuck fast to the frame and the tape came away cleanly.  Beautiful job!  I have used a lot of Vallejo Model Air paint, but I have had problems with the Vallejo paint coming up in places with the masking tape.

The antennas are fine E Z Line elastic thread.  I obtained mine on eBay.  Using medium CA, and a bit of patience, the material is easy to work with and is somewhat forgiving of handling accidents, unlike stretched sprue.  And, it never sags. 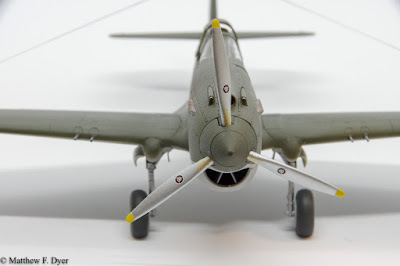 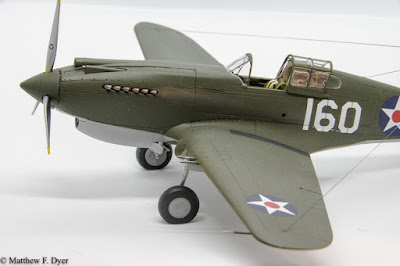 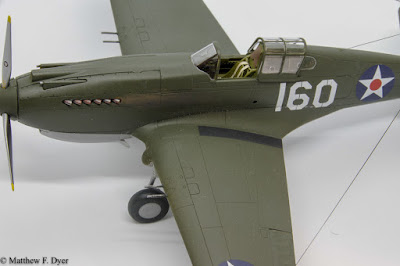 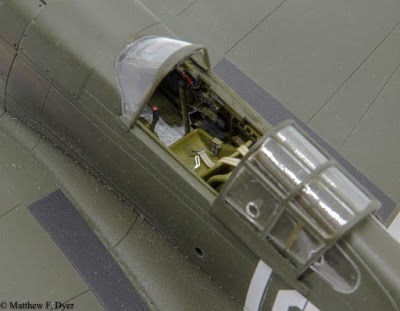 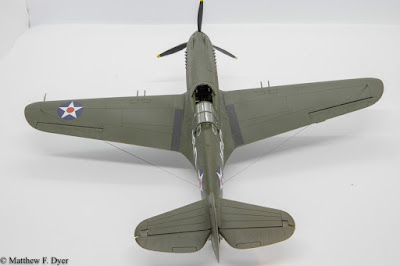 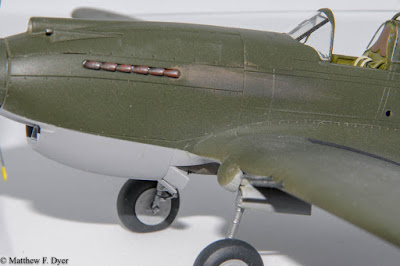 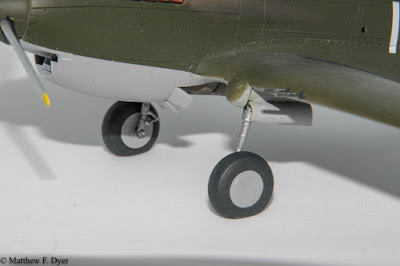 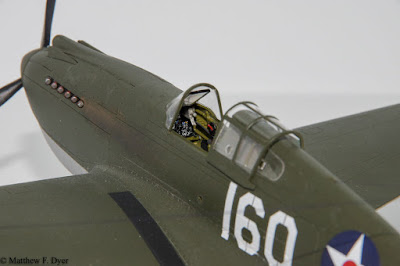 As always, thank you for visiting my blog.  Comments are always welcome.
Posted by Matt at 3:22 PM 2 comments: