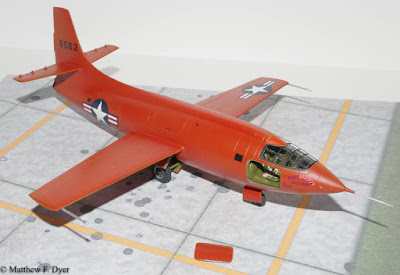 I really like ProfiPACK kits.  My stash has a few, and I have built a number of them.  The instructions are excellent.  They all have PE sets for cockpit and some other details.  In some kits (like this one) there is some resin. And, there are usually decals for around six color schemes.

According to Scalemates.com, this was a new tool in 1997 and has made a few appearances with Eduard over the years.  The cockpit would have been somewhat sparse without the PE in color that was included.

The moldings are relatively decent, but there are no helpful locating pins to speak of.

Although the wheels are not bad, Eduard included resin wheels which are very nicely detailed.  The wheel wells have no detail, but they are not easily seen.

Most importantly, this kit is the only game in town if you want a 1/48 scale Bell X-1.  I purchased my example up directly from Eduard at the IPMS/USA Nationals in Phoenix. 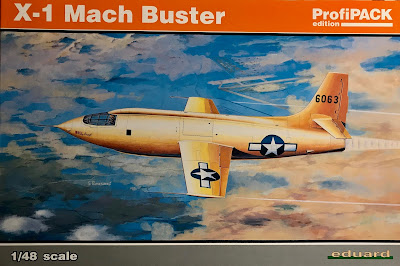 Part fit was decent with the joins between the wing/fuselage and stabilizer/fuselage benefiting from some Perfect Plastic Putty to blend them in.

Being a tricycle gear aircraft, some weight was necessary.  Eduard only indicates that you can put some behind the cockpit, but they do not say how much.  I taped the basic parts together and added some weights behind the cockpit to achieve what I thought would be enough weight to hold the nose down.  My calculation was that 16 grams of weight would be needed.  What to use that would fit in?  I had two small pieces of lead that that added up to 18 grams, so I epoxied them in place.  (The weights are two 158 grain .38 Special lead bullets I “requisitioned” from my reloading bench.)  My calculations were correct, and the model sits correctly on the landing gear.

The decals were disappointing.  I had read that Eduard was no longer offering Cartograph made decals in ProfiPACK kits.  (They will offer them in the Royal Class kits, however.)

So, the decals in this kit were made by Eduard in the Czech Republic.  They are not as clearly printed as Cartograph decals.  They are shiny, not flat.  Are they usable?  Yes.  But it is a disappointment that there will be no more Cartograph decals in the ProfiPACK kits.  I can say that will definitely diminish my interest in future ProfiPACK kits, and I can see more Weekend kits in my future.

The decals have four different schemes.  I chose the scheme that shows the X-1 as it was when then Capt. Yeager broke the sound barrier in October 1947.

All in all, this was a pleasant build that took a little longer due to the absence of location pins.  I painted the model with Vallejo Model Air 71.083 Orange.  Is it accurate to some FS number? I have no idea.  But it looks good to me. 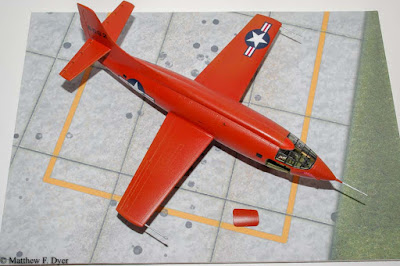 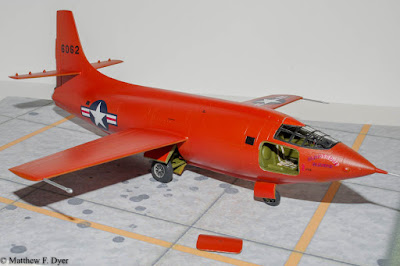 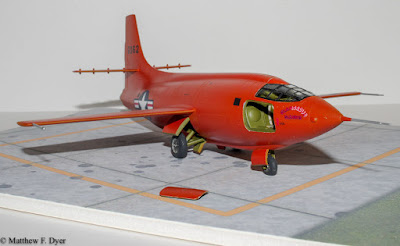 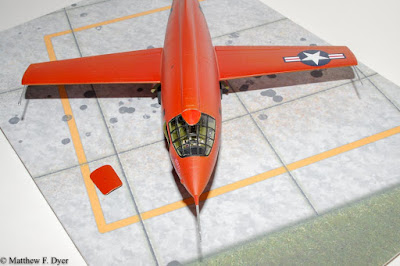 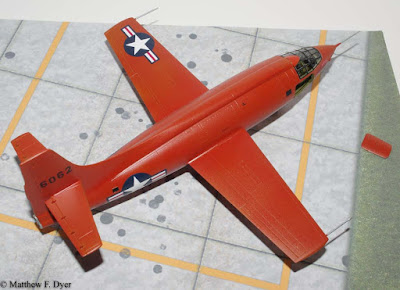 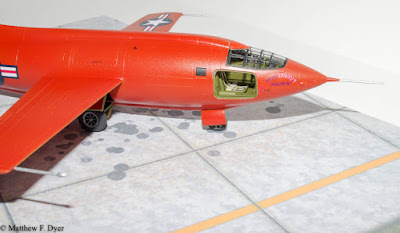 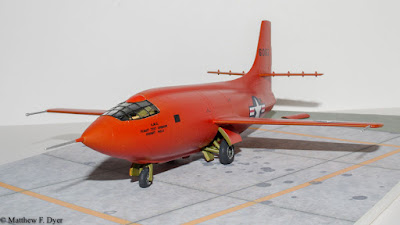 Captain Charles (later Brig. General) Charles “Chuck” Yeager piloted this aircraft through the sound barrier ion October 14, 1947, only a few days after the United States Air Force became separate branch of the Armed Forces.  It was the X-1’s 50th flight.

When Yeager made his historic flight, the full lettering of the aircraft’s name - “Glamorous Glennis” had no been completed.  In the photo below, Yeager is posing with an X-1 with the full name that is also painted white and orange.

I have read that the basic fuselage shape of the X-1 was suggested by a .50 caliber machine gun bullet.  Whether that is true or not, I do not know.  But it sure looks like a bullet.