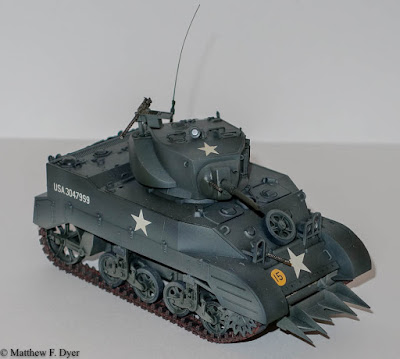 This kit made its debut in 1977. There was no Internet.  There were no cell phones.  The Gulf War was 14 years in the future.

This kit was in my stash, and I wanted a quick project before I left on my annual foreign trip (to China this year).  And, this seemed easy, and I wanted to add the M5 to my collection.

If you want an M3 Stuart (Late Production), Tamiya has or is about to release a brand new kit up to their modern standards.  I will definitely go for that kit too, but finished in a desert motif.

The kit is old school Tamiya.  The tracks are melted together, not glued.  The kit was originally a battery powered model/toy.  There is an open space between the hull top and the bottom of the chassis (which you won't see unless the model is upside down).  The molds are showing their age.

That being said, it is still a nice kit with decent detail.

The kit goes together with no issues.  The "rubber band" tracks fit well using the heated screwdriver blade method for joining them.  I sprayed them with Model Master Enamel steel and added some rust weathering.

The assembled model was first coated with a surface primer, which I have begun applying to all my models.  It gives me a mono-color smooth finish that quickly shows and gaps or other defect, and it provides a very durable surface to apply the color coats on.  If you need to use masking tape on your model, surface primer will keep your color coats from coming off with the tape.  Yes, you can put masking tape over acrylic paint which is applied ti a surface primer.

With this model, I used Vallejo Surface Primer 74.602  (black).  Black because I wanted the areas that the olive drab did not reach to be dark and in"shadow".

I have a love-hate relationship with Vallejo Surface Primer.  It yields an excellent base for all the rest of the finishing.  It also always seem to stick to the needle and nozzle of my airbrush no matter what I do.  So, I apply it and then clean the airbrush.  No big deal.  (I also use Tamiya Surface Primer in the aerosol can, which goes on easily leaving a beautiful finish.  Unfortunately it is not available in black.)

Next, I have been using some Tamiya Color Acrylic paint lately.  I love the way it thins and goes through the airbrush.  And, it cleans up easily.  Several jars I have are over 20 years old and still quite usable.  So, I selected Olive Drab XF-62.  It went in beautifully, but it is really dark.  Very, very dark.

The next step was to apply some weathering.  I have been practicing using my airbrush to weather and show wear on models, i.e., dust, exhaust stains, etc.  Using Dark Yellow XF-60 (thinned 2:1 X20A thinner to paint), I started lightly coating the lower hull area.  And, the first thing I noticed is that the live drab suddenly appeared to be a lot less dark and more used/weathered.  I guess this is what they call a "filter" coat of paint.

I selected the markings of the 3rd Armored Division “The Spearhead” in Normandy which mounted the Culin hedgerow cutter (named after Sgt Curtis Culin, III, its inventor).

One note.  On the 4th photo down here, you will notice that the pioneer equipment (axe, shovel, etc.) are painted olive drab, just like the tank itself.  During my service with the US Army, I was stationed for some of the time at Ft. Hood, Texas with the 1st Armored Division.  And, in Vietnam I saw some armor, mostly M48's and M113 APC's.  All of those tools were sprayed the same color as the tanks, jeeps and trucks they were mounted on.  I tend to follow this on my models.  Maybe in WWII, they were not painted olive drab.  I have a feeling they were OD like everything else. 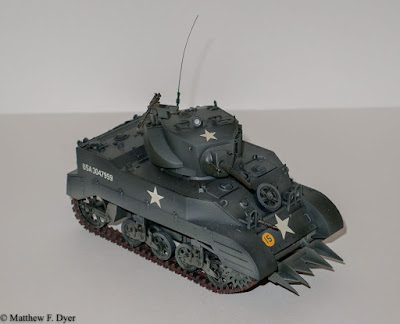 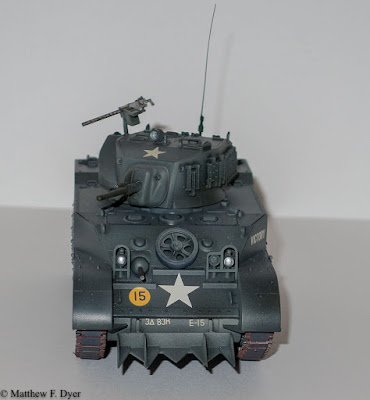 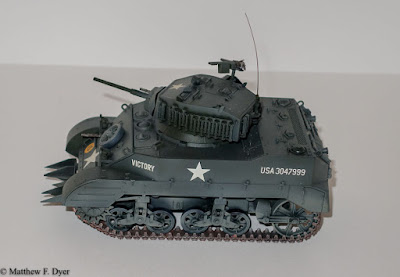 As I understand it, the M3 was the original version of the Stuart, but it was powered by a radial engine.  The aircraft plants were screaming for radial engines, so they were in short supply.  The answer was the M5 powered by twin Cadillac V-8 automobile engines with Hydra-Matic Drive operating through a transfer case.  The M5’s were quieter, cooler, and the automatic transmission made training new crews easier.

Here are two photos for the Internet of the M5 in action.  (I believe they are in the public domain.)  It was a fast little vehicle that performed a valuable recon role.  And with the 37mm main gun, it could defend itself against infantry and soft skin vehicles, but not the serious armor.

I once worked with a WWII veteran who rode an M5 all the way from Normandy to the Elbe River.  He described how it was when they ran into German armor such a Panther and Tiger tanks.  The little tank could really bug out fast!  After all, he was in a reconnaissance role.

Thank you for looking.  Any comments welcome.
Posted by Matt at 6:31 PM