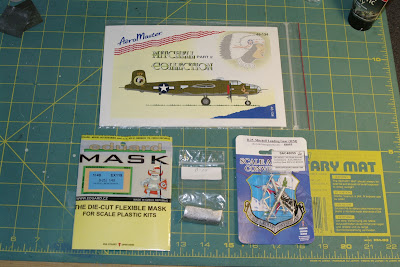 I have collected a few aftermarket items to enhance this project.  With all the glass, I had to have some Eduard die-cut masks (EX119).  These masks are so useful and time saving.  Because of the size of the model, I have opted for a metal landing gear set from Scale Aircraft Conversions (48055), which I thought was a prudent investment.  And, in my decal collection, I have some really nice markings from AeroMaster (I really miss these folks).  My set is Mitchell Collection, Part 2, 48-134.  Not that the kit decals do not look pretty good and much better than the decals Monogram used to include in kits.  To keep the model from tail-sitting, I obtained a nose weight from Terry Dean.  If this weight proves to be insufficient, I will add lead shot in front of the engines.  I don’t think that will be needed, however. 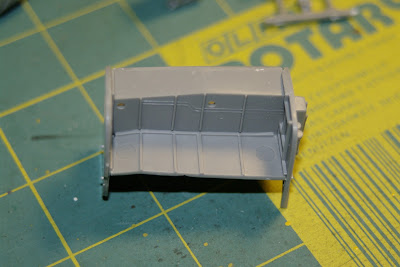 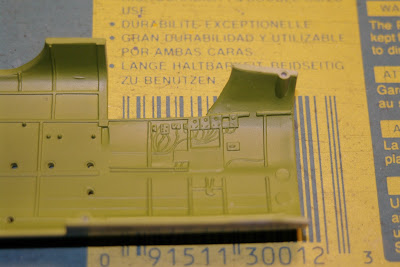 This is a 1977 kit.  I forgot how many mold release pin marks appear on these older kits.  There are many bumps and indentations to deal with.  The unfinished wheel well photo shows two rather large ones, and the photo of the inside of the left fuselage shows two on the right front.
My option has been to leave any alone that are not right on the surface where they can be seen.  By the late 1990’s, it appears manufacturers learned how to not create so many of these annoying marks, and it is rare to see them in a prominent position on a modern kit. 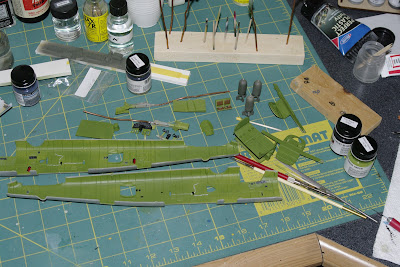 The interior parts have been painted green zinc chromate primer and olive drab.  I am using Model Master Acryl for this part of the project.  I prefer Vallejo Model Air paints, but there is not reason to let the existing stock of MM paints go to waste.  Much of the detail would not be seen once the fuselage is assembled.  I have already dry-fit the fuselage together and determined which areas will not be seen.  They will not be detailed.
﻿
When I have some more done, I will post again.  Meanwhile, I still need to post something on the Eduard Yak-3 I finished in October.